The Bullseye, Bull, Cork, Dosser....Why is the 'Bullseye' so called?

The sport of darts is surrounded by history, myths and speculation. The Bullseye on a dartboard is no exception and isn’t usually given a second thought, yet where did this originate and why is it so-called?

The modern game of darts has its own history, and indeed the first dartboards were small versions of the target boards used in archery. The name for the centre target area ‘the bullseye’ stems from archery.

However, exactly why the centre was called the Bullseye is still a mystery.

Some believe it dates back hundreds of years to when English archers to practice their skills and see who the most accurate shooter. The archers would use the skull of a bull as a target. The archer deemed the best was the one who could fire an arrow through the empty bull's eye socket.

Others believe the term Bullseye has been used in many different circumstances, many of which have nothing to do with targets or archery. One early use of the term was to do with a blemish in the centre of a glass window pane.

The bulls-eye was a trait in making the glass for windows. Hand-made, the glass, was formed by rolling into a disc using metal, wooden and wet paper tools. The centrepiece would contain the ‘bulls-eye’ blemish. Though history states this area of the glass was considered cheaper it also had use of allowing light pentation but also obscured visibility of items within a building.

Another handmade glass for window was blown into a cylinder shape then cut down the length and allow for flattening and cool before using. Early glass can contain bubbles so samphire, a plant was added in the kiln and the gasses it created as it burnt prevented bubbles forming in the molten glass. Modern methods now replace the plant.

Crown glass was one of the two most common glass making processes until the 19th century. The other was blown plate. The process was first perfected by French glassmakers in the 1320s, notably around Rouen, and was a trade secret. As a result, crown glass was not made in London until 1678.

The thinnest glass was in a band at the edge of the disk, with the glass becoming thicker and opaquer toward the centre. Known as a ‘Bulls-eye / Bullseye’, the thicker centre area around the pontil mark was used for less expensive windows. 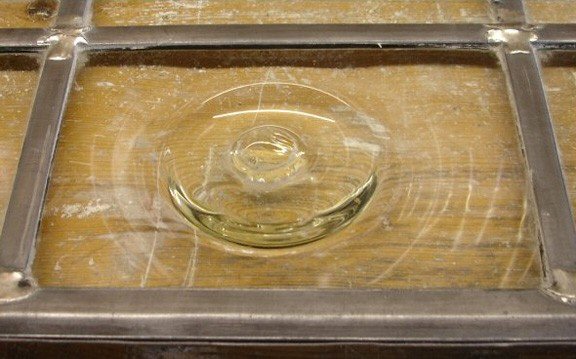 The term ‘Bullseye’ could also perhaps have relationship to the centre of something that led to its being used to refer to the centre of a target while some researchers believe that bullseye was used to describe anything small and circular since the 17th century.

What can he said is we cannot be 100% sure other than the term has been widely used to describe many different things unrelated to archery or darts! For example, someone that may be looking for an answer to a problem and they may find it and they many say they hit the ‘Bullseye’. A hard thing to find and in target terms can be hard to hit.

The Bullseye on a Dartboard

Many social dart players may have only seen one type of dartboard and that being the London 'Clock' or as some now call it the standard dartboard. However, in terms of dartboards, one thing has remained constant, and that is a central target area referred to as ‘the Bullseye’.

The origins of the game of darts stem from France (Fl&#233chettes) although people have been shooting and firing things at targets for much longer. The first dartboard was initially only segmented by dividing rings, as per an archer’s target. It wasn’t too much later fairground target boards introduces the segmented circular dartboards, the early origins of boards we play on today.

The ‘Bullseye’ has always been considered the hardest target area to hit on a dartboard due to its size. However, it now doesn’t have the highest-scoring value on the London Clock dartboard.

Before the London ‘Clock’ dartboard, there were many other regional dartboards used. The most common stemmed from Yorkshire. This dartboard consists of the same order of twenty segments, a doubles ring as per the London ‘Clock’ and a single central bullseye. The Yorkshire board preceded the London board and other boards such as the Ipswich and London Fives.

More about the London ‘Clock’, Ipswich, London Fives and other regional dartboard variations can be found on this website.

The Yorkshire dartboard gave the highest scoring value to the central target 50 points. The next highest value was double twenty 40 points.

With the introduction of the ‘Fives’ dartboards came the ‘double’ bullseye as some may say! The bullseye had been given a new ring with a value of 25 points. Officially, the centre bullseye retained its original name, and the 25-scoring area was known as the ‘Outer-Bullseye’ and some referred the centre as the ‘Inner-Bullseye’ while some called it a double bull or bullseye because it can be used as a double 25 to win a ’01 or in the case of a ‘Fives’ dartboard a ’05 game.

The Bullseye has all been given other names in the game darts and here are a few:

The 25-ring is usually just referred to as the Outer-Bullseye or 25. The term ‘Single Bull’ can add to the confusion; hence this is seldom used because the ‘Bull’ / ‘Bullseye’ relates to the central target. However, Soft-tip darts the ‘Bullseye’ and the ‘Outer-Bullseye’ count the same, 50 points! Don’t you just love this game!

I am sure there are other regional variations for the ‘Bullseye’, however, if you want to read more about darts slang, I have a section called ‘Dart terms and Slang’