Organising Darts tournaments in your local pub or club is not always that easy. Players need to know the format of play when they arrive and your rules for your tournament. Most Pub & Club league games use rules governed by the BDO ruling and for a comprehensive copy of their rules visit the BDO Website. However, to help you along, most fun tournaments can be organised without too much trauma.

Below you will see I have produced a couple of basic tournament sheets for you use in your local event. You can download save and reproduce these sheets free for your tournament.

The Standard Dartboard should hang securely from a wall so that the height of the centre bull is to the ground is 5ft 8ins / 173cm. (See Dartboard Set-up)
The throwing distances can vary from anything from 7ft to 8ft 6 ins but the standard setup is played from 7ft 9 ¼ ins 2.37 meters from the face of the dartboard measured horizontally.

The toe-line or oche shall be clearly marked and should be at a minimum 18ins long. The toe line can be just a painted line on the ground or a securely raised line indicator such as a piece of wood or metal. The latter is preferable has the thrower as a firm edge to rest his/her foot against not on top!

The order of play is either determined by a toss of a coin or by each player throwing for the centre bull the nearest being the player that throws first (BDO ruling) PDC Bulling up is slightly different. The rules here can vary depending on the league you may be playing in; the local rules should be observed at all times.

Any standard darts may be used.

A throw consists three darts except were the game is finished in less.

Darts cannot be re-thrown this includes darts that miss the board and darts that bounce of the board wiring system. Only darts that have their points touching the scoring area of board score.

A player may be told, if he or she asks, what they scored, or what number he requires for the game, by the score announcer, but not how to achieve it. He or she should not ask another team member for the outshot unless the part of the agreed rules in your local league/tournament.

If the number required for the game is exceeded in the course of a throw, throw ceases, and no account is taken of the score obtained during that throw.
The inner bull (50) counts as double of (25) the outer bull.

Generally, each player’s score must start and finish a game with a double (The out narrow ring of the board). Competition games, however, are usually played with a straight start (no compulsory double) but with a compulsory double to finish.

The first throw is deducted from the player start number e.g. 501 and then from the subsequent reducing total. The scorer should show both the score obtained for the throw and the reducing total remaining.

It is your event so you can make the rules however the more straightforward they are the easy it is for all.

If you need a FREE PDF Reader click here 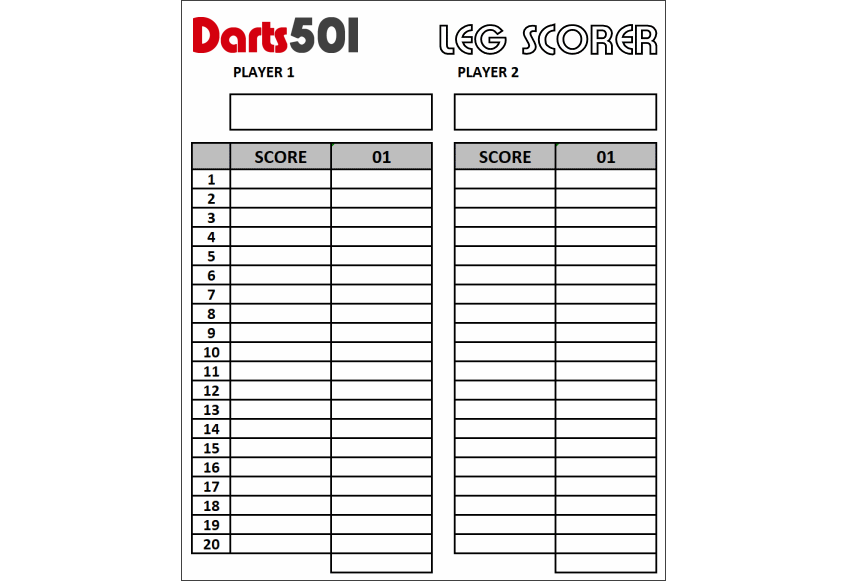