Alan Carr's Epic Gameshow reintroduced the show to ITV in 2020 and again in 2021. It the same great fun show with a revised ending. The show has gained cult status, not only for the prizes but also for its mishaps and the legendary Bronze Bully. All the Pro players wanted to make the highest score and hold the bronze Bully title for a year!

In 2021 Bullseye TV Gameshow celebrated its 40th birthday and it probably holds another record for one of the longest running TV shows to still be aired on British TV!

The original show aired between 1981 to 1985 and at its high point boasted over 15 million viewers very Sunday evening. Dart fans were obviously pleased to see the show return for a new series as the game show still receives some of the highest viewing figures for UK TV game shows. It also gave Challenge TV for the first time in their history a bigger market share than Sky One.

Bullseye is due to return spring 2020 as a one-off special as part of Alan Carr’s Epic Gameshows. Who knows this could lead to a new series!

Relive the show by playing one of the most recognisable theme tunes in British TV Gameshow history. The theme was written by the musician John Patrick. 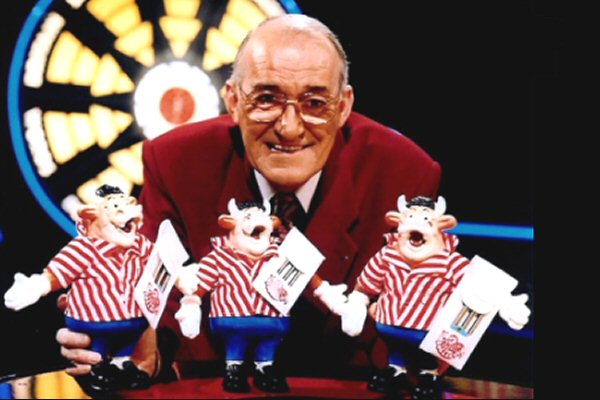 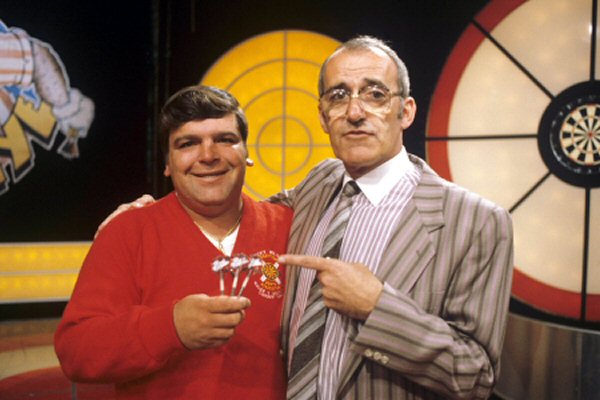 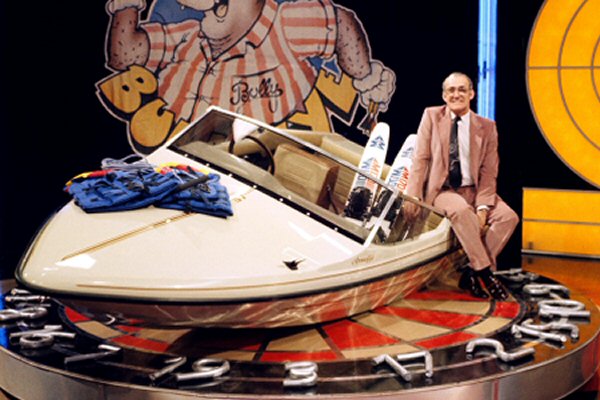 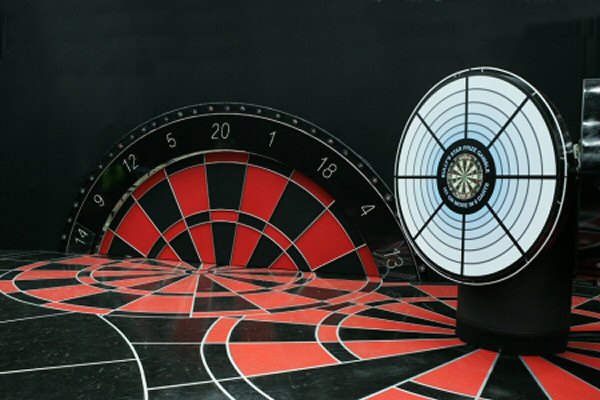 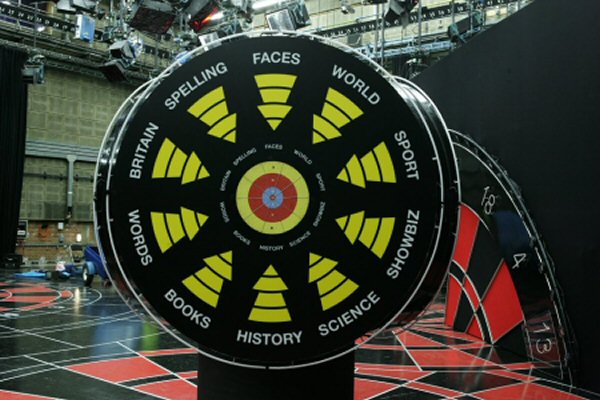 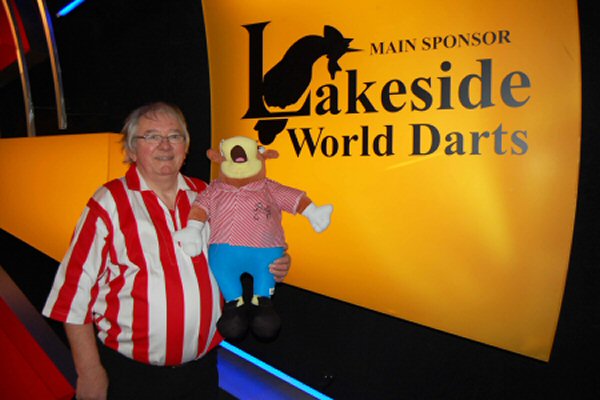 Every week contestants play darts and answer questions to win prizes.The winners sometimes gambled their winnings for the star prize. More often than not the star prize would be a speedboat! We never really new why but I guess if the prize was won a cash alternative was offered. But for most contestants it wasn’t something they would likely to use if they lived in the centre of the country! Never the less the show had all the attributes you would expect from a good game show; skill, tension, nerves, and a bit of luck! Would you gamble all your winnings for an undisclosed star prize? 101 or more with six darts? Three darts for the non-dart player (the person who has to answer the questions) and three for the dart player? It sounds easy! But not when you have the lights and cameras on you!  The pressure of the crowd saying gamble! Might have also played its part in the decision to risk all for the star prize. However, that is what made this show special, a must to see and a TV producers dream. The 2007 series took nothing away from its original format which is now receives cult viewing.

The famous Bronze Bully also featured in the series. Professional dart players and TV celebrities would throw their darts for charity. The professional players have nine darts to score as much as they can and if the total score exceeds 301 the score is doubled and the same value in UK £'s is given the winning contestants choice of charity. The player or celebrity with the highest scored in the series also won the famous bronze Bully for a year to take on tour with him / her to raise more money for charity. Jocky Wilson is reported of saying the Bronze Bully was harder to win than an actual Professional Darts Tournament. All dart professionals want to win this unique prize and only a few can say they have. 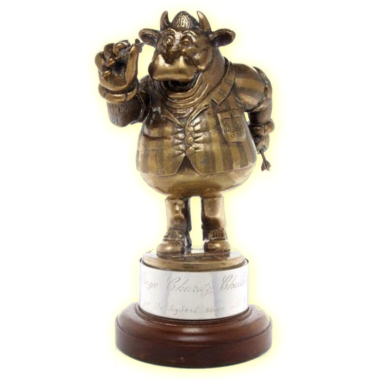 The highest nine dart score during the TV shows is held by Alan Evans who scored an impressive 401 in series 4. However, during the 2011 Bullseye Theatre Tour Bob Anderson topped the leader table with an incredible 420! Making this the new highest score thrown for the Bronze Bully. The charity for the theatre tour was Help for Heroes and they received £840.

Where does Bully live today? Well if he isn't on tour then he is safely locked away and he lives with the owner and creator of Bullseye Andrew Wood.

The 2011 Bullseye Road Show tour was Super, Smashing, Great! I attended the first event in Redhill in Surrey and I got to meet the legends of the show John Lowe, Bob Anderson and the late Eric Bristow MBE. Not forgetting Andrew Wood, the creator of Bullseye his wife Jane and Laura his daughter. It was a fun night and a few lucky people were selected at random from the audience to play. It didn't matter if you didn't want to play as you could just enjoy the show as I did. But if you were one of the lucky few to be selected then you stood a chance of winning £500!!!

Unfortunately, the theatre rules prohibited photo's being taken of the show itself however in the VIP lounge and in the foyer you could. All the legends were very happy to have their photos taken with you and sign autographs. There was also lots of Bullseye memorabilia to buy and if you missed out then you can still buy some on the memorabilia on-line. For further details see below and visit the Official Bullseye website. 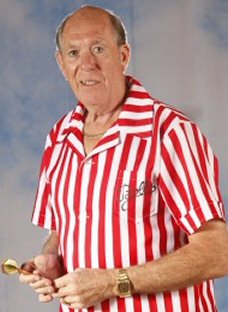 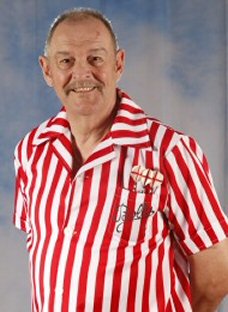 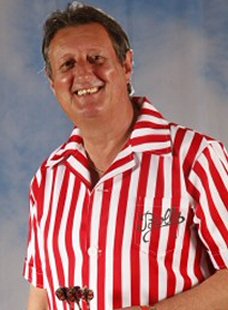 Photos from the Tour

Ok here I am with the Stars of the show. It was the first night of s successful Bullseye Tour

Each event the dart professionals threw for the Help for Heroes Charity. The highest score with 9 darts during the events was 420! thrown by Bob Anderson. This figure was doubled and sent to Help for Heroes charity. Read more about the Bullseye Road Show.

Why not spice up your PC & Smart phone with some Bullseye Wallpaper! There are now three PC and five new iPhone Wallpapers to choose from. Just select the design and screen resolution from below, copy and save as wallpaper.

Click on the link below to see them all

A little unknown fact I used to write the Bullseye website and all the wallpapers created I produced for the website.

Sadly, a couple of the stars are no longer with us. Jim Bowen passed away on 14th March 2018 and Eric Bristow less than a month later 5th April 2018. Both sadly missed by dart fans across the World