Why Practice? Well, basically this is a time that you can have to improve your game, practice out shots and focus on weak areas of your game. It is as important to practice hitting big scores as it is the double and finishing combinations. Remember a game isn’t won until the double is hit (most games).

Like most sports or games warming up before a game is important. Unlike pure athletes you are unlikely to pull a muscle or suffer an injury playing darts, however, a good warm-up routine will prepare you for a match, it will help loosen your arm, improve your match games and improve your confidence.

If you feel your arm is a bit tight before you try to throw stretch your muscles by extending your arm while turning it. Flex and twist your wrist hands and fingers. All of this will help loosen your arm for throwing.

It doesn’t matter what standard of player you are but hitting high consistent scores in a game is an essential part of the game. A consistent high scorer is more likely to win a game than one that occasionally hits a 180 / 140 then 60 / 45. We have all been there at some stage but how do you improve? Practice of course and here are a few games I play to improve my game.

This sort of practice will help you focus on your scoring you will be able to play a virtual opponent that is consistent and as you win more move the target up. For warming up don’t set your target too high.

If in a match you can score 10 - 20 more than the person you are playing against you will have an advantage when you come to finish, it may mean you will have the first shot at the double, even if you throw second in a leg.

Although I have placed a checkout chart on this site to help people not sure of finishing there are more way to finish than I have illustrated and in fact, many of the two darts out shots would not be considered by players when they have three darts in their hand. But it is important to practice finishing as much as heavy scoring. If you can’t hit doubles consistently then you will lose more games than you will win even if you are a heavy scorer.

There are many ways to practice doubles, you can play a game of round the clock hitting each double in turn and set a target of the number of darts you take to hit them all then try to better yourself by beating the previous score. This type of practice is fine but I would concentrate more on doubles that break down easily and the higher numbers example:

Most games you will see played are finished on these doubles, why? Two reasons:

I suggest you first choose a double let's say 16 and then set a time to score as many of the doubles as you can within the time. A 10 – 15 min on a Practice session should help you improve your chances when it comes to a match. If you can hit any double within two darts you are at a good standard.

Another way of helping you finishing is to play a game where you have to hit a number or combination of numbers before the double. An example of this could be 33 hit number 1 then double 16 once you hit it move the number up to 35 and Practice all the finishes. This will improve your ability to hit all sectors of the board as well as doubles.

27 is the number of points you begin with. Your first three darts are for double one, and so on until twenty and then bull. For each hit, you get the value of the double hit (three double fours would score 24). If you miss three darts at a double you lose the value of that double. If your score reaches zero you lose. A good score is 400, and a very good score is 600. Once again, keep a record of your scores and your personal best.

The game of darts is all about hand-eye coordination. Some board manufacturers also produce boards that have half-size doubles and trebles the aim of this is to help you improve your accuracy. If you have ever played on a Manchester Log-End Dartboard, then you will know what I mean. The doubles here are approximately 4mm wide! Playing on these boards will, without question, help you improve your game on standard board. But if you don’t have a board like this, then you can help improve your accuracy in the following way.

Close grouping of darts is always considered a good thing as this shows the consistency of throwing, but when you are throwing for trebles and doubles sometimes darts may cover/block a clear view of your objective and focusing on a smaller area is necessary. I have found you can enhance your accuracy by placing a sticker or matchstick in an area of the board that you want to hit. Here you aim for the sticker or matchstick, your focusing and hand-eye coordination will improve. If you are very skilful use a non-safety match and try lighting from your throw (Don’t worry it won’t set the board on fire!)

Since initially writing and posting this training exercise a dartboard manufacturer has produced a board that has the dots marked on it. Ideal from training but might not be the best for a match.

I will be forever grateful to an old onlooker watching me practise in a local pub. The pub had a dedicated dart room with seating and had a handful of locals who visited for a pint, and one guy, in particular, loved to watch the darts. In his day, he played, but unfortunately, he had lost a couple of fingers in an industrial accident, putting an end to his dart playing days. He described a betting game he would play with his pals. They would place a match (non-safety match such as a Swan Vesta) under the dartboard wire or outer number system, the object to LIGHT the match! Hit the head of the match, and it will bust into a flame!

I gave this some thought, initially thinking I had my leg pulled. However, I gave this a go and indeed, the match will burst into fire IF you hit it correctly. Several days later, I performed the match lighting in front of the old chap, apologies, and I can not recall his name. He was delighted to see the feat again. However, this became better as I positioned the match in the centre of the main target areas to help improve my accuracy around the board. I would focus on the small red end of the match, and my game improved tremendously.

What had started as a pub betting game became a focal point on how to improve dart accuracy. If you can hit the head of a match within a few throws, you will be able to hit anything on the dartboard. Always throw for the centre of the target area as it gives you focus and 50/50, either way, should you through high or low.

As a Japanese proverb may say: ‘a great profit for a small cost.’

If you can play others that are equal or slightly better than you before a match then this will help you when you come to play but if that’s not possible then have a virtual opponent. Set a game target i.e. number of darts to finish a game your virtual opponent will always hit. If you are a consistent 60 scorer set your target at 24 darts this sounds a lot when you look at the pro’s playing but I have watched and played in hundreds of pub and club games and you will be surprised how many games are won in 24 darts or more! Your objective is to score 501 and finish on a double within 24 darts. If you are of a standard that hits regular 100+ then set a target of 16 darts. A 16 dart game is considered very good throwing. The same rules apply score 501 with a double finish and see how many you win against your virtual opponent. If you are playing a 24 dart game and winning most or all bring the target down to 21 darts (i.e. a throw less and so on). This way you will feel some pressure to hit consistently.

There is no substitute for match play, the pressure is on, you either perform on the night or you don’t. Many good players can hit the big scores in practice but can’t when it comes to matches. I believe I fall into this category. Nerves and others expectations can all add to the tension and any tightening of the arm will inhibit your throw. The best advice I can give is to arrive early so you can have a good practice before your match, play the game through your mind and concentrate on your scores not your opponent's above all enjoy the game, we can’t all win all of the time. 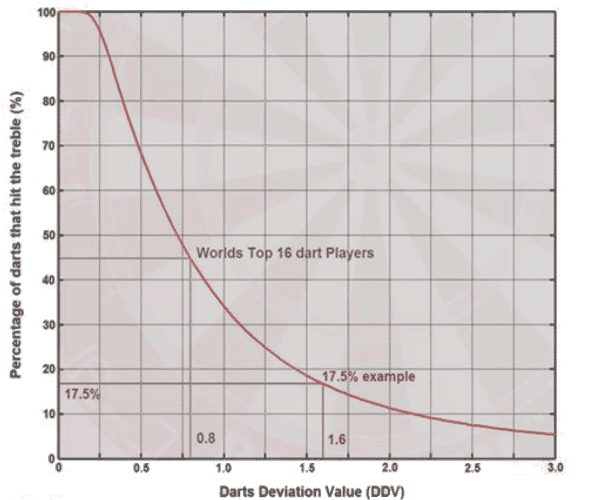 Fancy yourself as a Pro-darter? Compare you darts performance with the pro's by using the Winmau-Nieuwstadt DDV Challenge.