Why is the 'Oche', throwing distance in darts so called?

The throwing distance to the dartboard can vary depending on the type of board or indeed the rules you are playing too. However, one of the most common questions is why the throw line is called the ‘Oche’?

The ‘Oche’ as we know it today is a term used for the throw-line, Toe-line, distance marker, whatever your preference. But where does this term come from?

The origins of this term have been referred to as an old Flemish word for ’nick’ or ‘notch’ that some may have given credence to. Some have looked for this word in old English and believe it could be from a word ‘Hocken’ meaning to spit, saying the ‘Oche’ line determined on how far a person could spit from the board!  Okay I don’t buy this.

It could perhaps be connected with obsolete word 'oche' meaning to 'chop off'or from old French 'ocher' to cut a notch in? Hmmm!

It could have been a notch between two floorboards. Notch is also used in archery terms. The notch of an arrow is where it meets the bowstring.

However, the truth is a little simpler than that, the throw line wasn’t originally called the ‘Oche’, it was called the ‘Hockey’. Details can be found in old dart books: ‘The Guinness Book of Darts’ by Derek Brown first published in 1981 and prior to this ‘The Various Dart Games and how to play’ them by A. Wellington. This book is No.28 in a part of a series of books by the London Universal Publications Ltd. I believe this is now just called the Universal Publishing Ltd. The Word ‘Hockey’ for the throw line distance is also used in the Unicorn book of darts 1950.

The disbanded News of the World Individual Darts Championships which many darts fans would have known or heard about also used the word ‘hockey’ as the throw line. The ‘Hockey’ at some point during the period of the News of the World Championships was shortened either deliberately or by poor communication. The  ‘Hockey’ as we knew it became the ‘Oche’ and this term has stuck ever since.

This is a little harder to establish. However, many terms used in the sport of darts come of other games and sports. For example, a leg of darts? Basically, meaning a distance run as part of a race or two-leg home and away match. In terms of darts, this means a game. A match consists of x legs or x sets consisting of x legs.

In field sports, there are also lines which a player must not cross such as in cricket a bowling crease, in field hockey, tennis, quoits, however, none of these directly refer to a ‘hockey’ line. Field lines, Crease (notch again), service line, baseline.

The word hockey itself is of unknown origin. One supposition is that it is a derivative of hoquet, a Middle French word for a shepherd's stave. The curved, or "hooked" ends of the sticks used for hockey would have resembled these staves.

Another supposition derives from the known use of cork bungs, (stoppers) in place of wooden balls in a game of hockey.  The stoppers came from barrels containing "hock" ale, also called "hocky". So, could the throw line have been marked using a stopper from a barrel of ‘hock’? Giving its name to the ‘Hocky’, ‘Hockey’ line? This indeed is plausible if we accept that darts was indeed a game first throwing darts at a barrel, so a stopper could have been used for a point at which the dart was thrown from. This, however, cannot be proved but in the context of the game and establishments in which the game was and still is played this explanation may have some credence.

Although many answers have been given to terms used in darts, some terms still allude us and although I am willing to go the extra mile to find answers to these long-term questions, sometimes the origins are hard to find or we have to draw possible plausible conclusions on research found at the time. This should not all always be taken as the truth or fact unless the explanation can be verified. 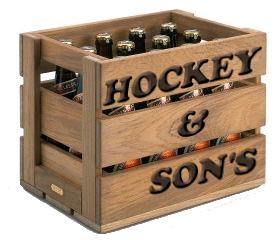 My own research leads me to believe a plausible explanation that stopper from a hock beer barrel may have been used as a marking point to throw from, hock also known as ‘hocky’. This may have been referred to as the ‘hocky’ marker or ‘hocky’ line. Over time ‘hocky’, I believe came written as ‘Hockey’ and this name has been published in rules and books dating back to the 1920s. This I believe, in turn, was shortened, miss heard or recorded as ‘Oche’ at some point during the period on the NoW championships period, because ‘hockey’ was still being used as a reference to the throw line at this point.

You may have your own views, all I am giving you here is a plausible researched explanation as I cannot find a direct reference to other games that use the word hockey-line, other than the hockey game itself.

The internet is full of great information and some entries as the truth are in fact not.  These references are sometimes plagiarised and reused and given as truth when there is little truth in them. One notable MYTH is the hockey line came from ‘Hockey and Son’ beer creates. It is said that a line of beer creates were used to make the maker hence the name ‘Hockey’ this is NOT true. No such brewery has ever been found to exist.

Budding historians, the name Hockey in terms of the field sport has never been fully established. The origins of ‘Hockey’ used for the field game date back to 1773. I believe hockey is mentioned in 1363 proclamation by King Edward III of England this is based on a modern translation of ‘Pilam Manualem’ which was originally written in Latin.

The name horkey was applied to the end of the harvest customs and celebrations, especially in the Eastern Counties of England, although the word occurred elsewhere in England and also Ireland. Since it is found in dialect, there is no standard spelling and other versions include hawkie and hockey. Mentioned from the 16th century onward, the custom became less common during the course of the 19th century and was more or less extinct in the 20th. It is mainly remembered now because of the poem dedicated to it by Robert Bloomfield in 1802. This has no direct link to the Hockey line in darts nor to the sport of Hockey but does have connotations to the use of a scythe or the sickle believing where ‘Hockey’ may have originated.

“In Suffolk (England) husbandry, the man who goes foremost through the harvest with the scythe or the sickle is honoured with the title of ‘Lord’, and at the Horkey”,

Links to the sport of Hockey probably originated from words associated with a scythe or sickle, words meaning a hooked form Horkey and but from here to the darts-line marker becomes a little thin. What can be said, however, the word ‘Oche’ we use as a throw-line / toe-line, the distance marker from a dartboard was at one point called ‘Hockey’ or ‘Hockey Line’.