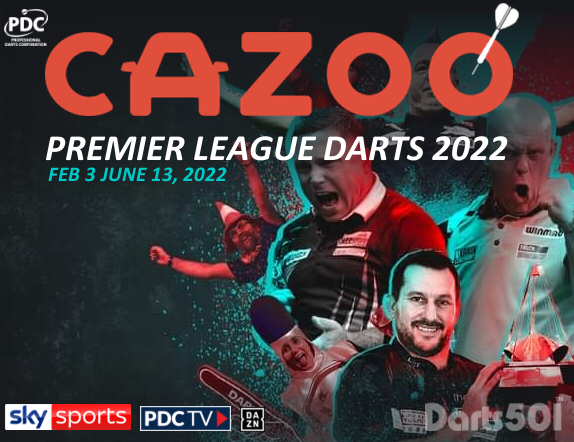 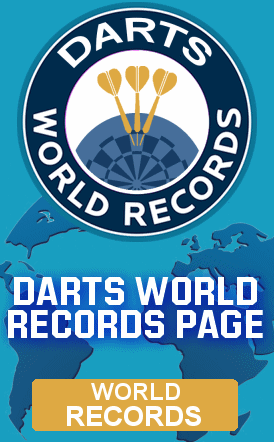 A New sponsor, New rules and a New Premier League Format played on a New Dartboard for PDC events. What more can a darts fan want.

The PDC has announced the new Premier League format consisting of eight players. Each night will be a mini-events played to a winner. Here is the 2022 Cazoo Premier League Lineup:

The PDC has also announced their new dartboard sponsor, Winmau. The Premier League will be played on Winmau’s latest top of the range dartboard, the Blade 6, Triple Core Carbon. The dartboard has already received excellent reviews from players, fans and officials, and fans should see a marked improvement with this new technology.

Printable PDC, WDF, WSDT and UKDA Dart Events calendars are available on this website. Please select the calendar from the calendar tab above. Due to the frequency of change, please check the last updated date at the top of each calendar and the governing body or organisers websites for further changes. PDC | WDF | WDST | UKDA

Many viewers will know I have written several very successful dart websites over the past seventeen years, each with their own spin on the sport. I have also written a few professional players websites that you may also have come across. My love of the game has never diminished and with over forty years of playing the game, I would like to share as much about darts the game, the sport, the history and the development of the game.

This website is new and fresh and I have learned on my experience as player, developer and designer to hopefully bring you a little more to the sport millions love and play every week.

This website contains information regarding the ‘01 game played by all plus the many UK regional dartboard differences of both past and present. Players nicknames, music, dart checkout charts and basic tournament charts are available for you to download and print for your personal use. There will be something on this website for everyone, even if it a quick look at the facts and myths that surround the sport.

As a player, I would rate myself as a good pub league player. I never ventured into major competition except for the first year of PDC UK Open, I won locally but was unable to attend regional knockouts. Today I tend to watch as a keen supporter of the sport and love to see people enjoying the sport, even if it is only over a friendly pint or two.

My thanks go to the major dart organisations, dart manufacturers, suppliers, the darts historian Dr Patrick Chaplin, darts legend Trina Gulliver MBE, Mark McGeeney and the many others that have helped me over the years to develop this website and many other dart websites. More details can be found on my acknowledgement page. See footer.

Supported by the Biggest Names in Darts 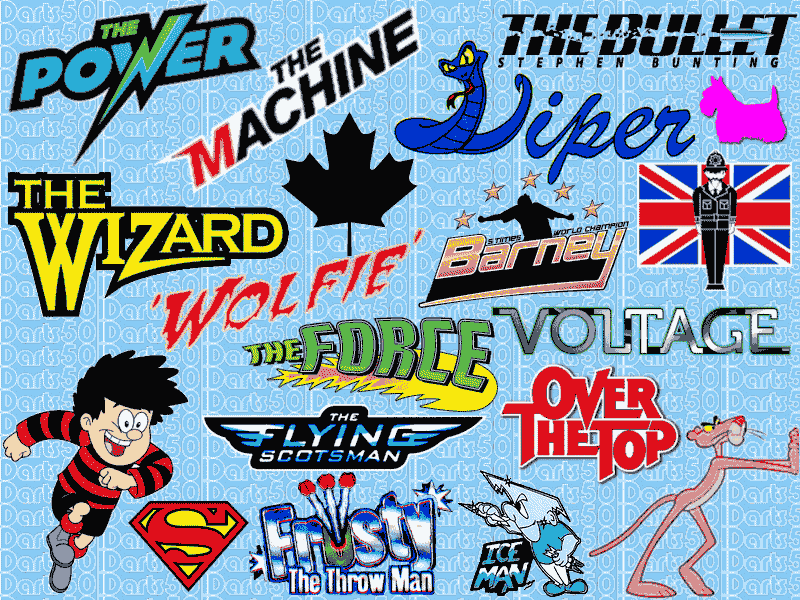 An increased number of visitors have contacted me about players walk-on music and nicknames. Some of you have kindly supplied me with more information; therefore, I have updated both the players' nicknames and walk-on pages on this site. I hope to add a few more in the near future, but in the meantime if you know anymore or if any player has since changed either their Nickname or walk-on, please let me know via my contact page.

I do realise there several missing of missing nicknames and walk-on. However, I add more to the lists all the time.

A Brief Introduction to Professional Darts

In 2001, the BDO introduced a Ladies World Darts Championship, which England's Trina Gulliver MBE won. Trina has won this event for seven consecutive years and made the final yet again in 2008 and 2009 but only to lose to a new up and coming star Anastasia Dobromyslova from Russia in 2008 and Francis Hoenselaar from Holland in 2009. In 2010 Trina again regained the title, beating Rhian Edwards from Wales 2-0. She then repeated this feat in 2011, again beating Rhain Edwards by the same margin 2-0. In 2016 Trina won the World Darts title, making her the most successful ladies darts player in the World, a record-breaking Ten World Titles. Trina has been awarded the MBE for services to darts and charitable fundraising.

In 2008, Ladies dart player Anastasia Dobromyslova moved away from the BDO to the PDC. Anastasia played in a preliminary qualifying round for the PDC World Darts Championship 2009 but lost to Dutchman Remco van Eijden 5 legs to 3. She also tried to qualify for the 2010 championship but failed. Anastasia moved back to the BDO in late 2010 / early 2011, and in 2012 she won BDO / WDF Ladies Worlds Darts Championship for the second time and then again in January 2013.

In 2007, the PDC introduced the first Youth World Championship. Arron Monk won this event, who beat Michael van Gerwen 6 - 4 in the final. However, until 2015, the BDO followed suit and introduced its own Youth World Championship. It was sixteen-year-old Colin Roelofs from the Netherlands became the first victor beating seventeen-year-old Harry Ward from England 3 - 0. Harry, unfortunately, didn't win a single leg in the final. However, I am sure we will see a lot more from all of these youth players in the future.

Lisa Ashton from Lancashire has since been dominant in the ladies game, winning in 2014, 2015, 2017 and again in 2018. However, in 2019 Lisa was sensationally knocked out in the first round by the Japanese soft-tip star, Mikuru Suzuki. Mikuru went on to win the 2019 Lakeside title beating England’s Lorraine Winstanley. Mikuru followed this up by winning the Dutch Open the following month. Mikura retained her title in 2020, gain beating the tournament favourite, Lisa Ashton.

During the 2019 Lakeside World Championships, calls for a significant review of the ladies' prize fund and short match format were called into question. The winning prize for women was just £12,000 compared to the men's £100,000. The chairman of the BDO at the time said this would be reviewed.

2019 also witnessed a number of the top BDO players move to the more lucrative PDC. With a £14M annual prize fund and the BDO contract restrictions taken off, players flocked to win a PDC tour card.

Glen Durrant, who had just won his third consecutive BDO World title, and former BDO No.1 Mark McGeeney, were among the thirty successful players to win a two-year PDC tour card. They were joined by a few others that featured the BDO World Championship event, thus depleting the BDO's main contenders. With the main BDO stars moving to the PDC, the BDO was left with the old ageing guard to re-establish the once firm grip the BDO held in World Darts.

In 2020, with a new chairman on board, Des Jacklin, the BDO moved their world darts championship away from the Lakeside venue to the O2 Arena. The move was not met with overall approval from the loyal BDO darts fans as they decided to not attend in their thousands. The BDO world championship will go down in history for all the wrong reasons. The change of venue and the recent loss of professional darts referees all added to the BDO misery. The promised prize money was slashed, and the conversation turned away from the players and was directed to the chairman. The poor management left the BDO in debt, and the organisation's future in 2020 looked in doubt. Des Jacklin later resigned as chairman but was reinstated following a narrow county representative vote victory. However, Jacklin could not convince all, and there was a challenge to the BDO dominance in the UK. The BDO had lost its status as it didn’t represent a Country within the World Darts Federation (WDF) and lost its vote. The respective organisation had finally lost its support, and in 2020 several challenges were made to take over the running of the Inter-County Championships. The UK Counties voted for a new organisation UK Darts Association to take over the running of the England and Welsh County Leagues. The 2021 British Inter-County Championships will now be known as the UK National League, Premier League, League One, Two, Three ect. The WDF introduced a World Darts Championship and World Masters, the fisrt World Championships again being staged at the Lakeside Country Club in January 2022. The PDC now firmly run the professional side of darts, with more players competing to join each year.

Dart fans may question the above because Phil Taylor was to receive an MBE in 2001. However, he didn't receive it. The award medal was annulled because he was found guilty of an indecent assault. Taylor denied the charges but had to pay £2,000 as a result of his conviction.

UK Awards given by the Crown are subject to conditions. One condition is a recipient criminal record. Awards issued to others, not necessarily sports stars, that later have been found guilty of a crime also face losing awards and titles issued

In 2010, Russ Strobel submitted to Darts Australia a new recommended dartboard height for Wheelchair users. The height Russ has come up with is 137cm to the centre Bull. The height is based on the perceived origins of the standard hanging height of the standard clock dartboard. It said the average height of a man in the England UK was 5'8" around the 1920s, the height of the centre bullseye of a standard board. Modern adjustments make that 173cm. Russ took this analogy and worked out the height of a man of 5'8" (173cm) be sitting in a wheelchair. His exact figure came out to be 136.5cm. However, as Russ explained, adding 0.5cm would make the recommended wheelchair dartboard height easy to remember, 137cm (wheelchair) - 173cm (Standard). Darts Australia accepted the concept of the new height for Wheelchair uses, and in 2012 it was also accepted by the World Darts Federation. Read more about Disability Darts can is featured on this website.

On this site, you will find a brief history of this intriguing sport along with all the information you will need to set up the dartboard and organise darting events. You can also learn how boards are constructed using sisal (a material used in rope making) and how dart weights, lengths, shafts and flights can alter the dart's flight.

The site also features traditional games played on today's standard dartboards and UK Regional dartboards, the Yorkshire and the Manchester log-end, to name just two. You can download rules and many games from here as well as those all-important checkouts.

You will also find Practice routines to improve your accuracy and scoring consistency, as well as information about maintaining your dartboard and darts. Many dart-related links are also linked to professional dart organisations, manufacturers, suppliers, and professional dart players. My thanks go to them for their help and support in building this site.

I hope you enjoy the website. Your feedback is always welcome, and if you like the site, please inform others.

Darts501 was established in 2004 and from its humble beginnings and a few makeovers, the website has had over well over 14 million viewers, and the increasing trend continues. In 2019 the website attracted a conservative 1.6 million. However, with more people opting not to have their visit to this website recorded by modern browsers and VPN, this figure is vastly undervalued. Thanks to all that visit, and keep calling back to see regular updates.

Darts501 has received many good references from professional players, commentators and other writers of the sport. It has become a resource website professionals recommend to others.

Further research into the sport continues and includes dartboards used across the UK over the past 100 years. The use of darts in war, including the secrete service in MI9